US Threatens To Isolate ‘Noisy’ Cameroonian Diaspora, Throws Support For One Cameroon

The United States Assistant Secretary for Bureau of African Affairs, Tibor Nagy made the remarks in a Press Statement published on the website of US State Department on Friday November 6, 2020. ” We will not work with groups – or attend diaspora-organized events – that include calls for violence or hate speech,” he said, adding that Cameroonian Diaspora can play a key role in the peace process in Cameroon.

Mr. Nagy reiterated the United States’ position in the respect of Cameroon’s territorial integrity, appealing to the warring factions in Cameroon armed conflict to drop their weapons and negotiate. “The United States supports the territorial integrity of Cameroon and calls for all actors to peacefully address the long-term grievances driving the current conflict in the Northwest and Southwest Regions and to cease exacerbating the hardships experienced by civilians in these regions.” 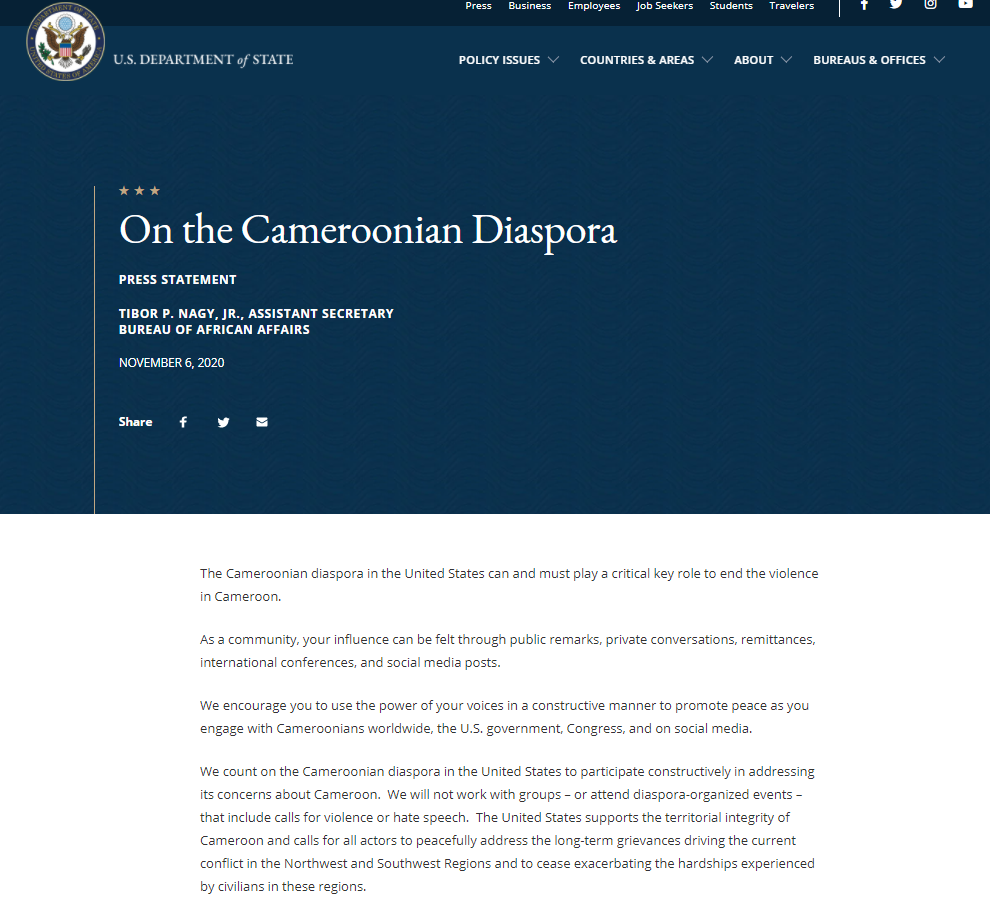 The Press Statement made mention of Social media two times, thus highlighting the importance of Social Media in peacebuilding which unfortunately has been transformed into a platform where insults, attacks, blackmail, intimidation, and manipulation, are common.

Some leaders and activists have found safe haven on social media and using it as a tool to pay back their enemies with their own identical coins, at the detriment of the suffering population.

“As a community, your influence can be felt through public remarks, private conversations, remittances, international conferences, and social media posts. We encourage you to use the power of your voices in a constructive manner to promote peace as you engage with Cameroonians worldwide, the U.S. government, Congress, and on social media. The United States government considers the Cameroonian diaspora a critical community that can push for meaningful change in Cameroon to address long-term grievances, support the safety of humanitarian workers, get children back to school safely, and bring an end to the fighting that has led to untold suffering.”