DAKAR, Senegal — As accusations of human rights violations pile up in Cameroon’s two-front battle against secessionists and Islamist extremists, the United States has decided to scale back its military assistance to its longtime ally in Central Africa.

The Defense Department told Cameroonian officials that it would hold off on providing military gear and training programs, opening a noteworthy rift with a strategically important partner in the fight against terrorism.

“The bottom line is right now in Cameroon, they have been a good partner with us counterterrorism-wise, but you can’t neglect the fact that they have — there are alleged atrocities in what’s gone on there,” Gen. Thomas D. Waldhauser, the leader of United States Africa Command, told lawmakers Thursday during congressional testimony.

American officials have not elaborated on the abuses in Cameroon, other than to say that the United States does not assist security forces credibly accused of gross human rights violations. It was unclear whether the move against Cameroon was in response to abuses carried out as part of the government’s crackdown on secessionists in English-speaking regions, or ones that have occurred in the battle against the Islamist militant group Boko Haram. It could be both.

General Waldhauser pointed out that the American military has provided training on the law of war and ethics to the elite Cameroonian counterterrorism forces fighting Boko Haram. He also said the military was taking its cues from the State Department.

Cameroon borders Nigeria, where Boko Haram has begun ramping up attacks after terrorizing the northeastern part of that country in recent years, and it shares a frontier with the Central African Republic, where armed groups have been locked in religious and communal fighting since 2013.

“We do not take these measures lightly, but we will not shrink from reducing assistance further if evolving conditions require it,” the State Department said in a statement, adding that some programs would continue.

Cameroon’s military has been accused of engaging in a heavy-handed response against the separatists.CreditAshley Gilbertson for The New York Times 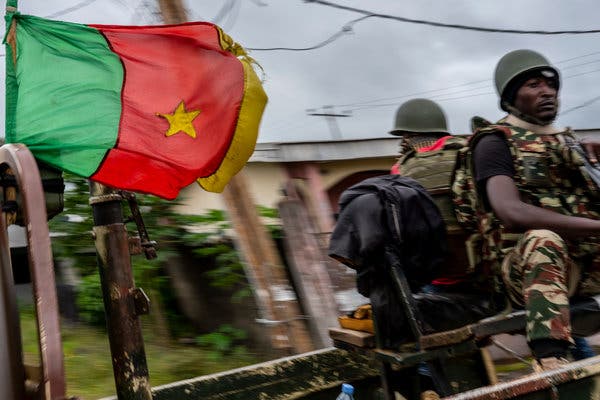 “We emphasize that it is in Cameroon’s interest to show greater transparency in investigating credible allegations of gross violations of human rights by security forces,” the statement added.

The American government has a particular interest in supporting the battle against Boko Haram, which has factions that take orders from the Islamic State. The United States has for years stood by Cameroon in the fight, providing training and military equipment to the nation, as well as to bordering countries. American officials say they have no indication that Cameroon is using the provided equipment outside the Boko Haram war zone in the north.

Training and spare parts for a Cameroonian C-130 aircraft and training for a helicopter have also been suspended, and the United States has withdrawn an offer for Cameroon to participate in the State Partnership Program, which pairs nations with various United States National Guard units for training.

Cameroonian officials did not return repeated requests for comment.

Last year, the Cameroon government arrested soldiers after a video was circulated showing forces shooting to death two women, an infant strapped to the back of one of the women, and another child. The video most likely was filmed about five years ago in the north, where Boko Haram operates, when violence was spiking there.

Separately, Cameroon’s fight against Anglophone separatists, who want to form their own nation called Ambazonia, has produced a stream of allegations of abuses. People living in the English-speaking regions have complained of horrific acts of violence carried out by security forces in a heavy-handed response to a ragtag group of separatists.

Cameroon’s tangled colonial legacy has left it with two official languages, English and French. French speakers populate the biggest cities and the highest ranks of government, including the presidency.

Cameroon is fighting a two-front battle against secessionists and Islamist extremists.CreditAshley Gilbertson for The New York Times 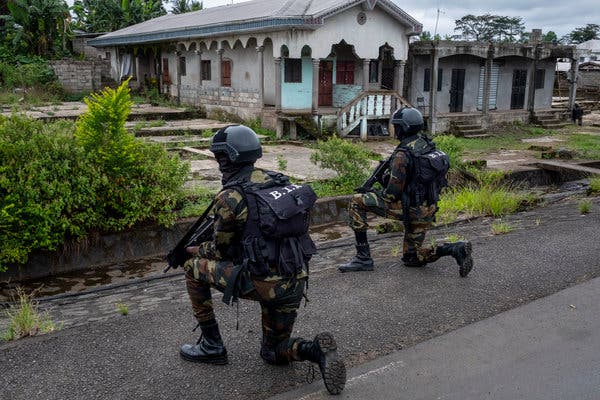 President Paul Biya, who has been in office since 1982, is the second longest serving ruler in the world and has surrounded himself with francophone allies, handing out power to a group of cronies who offer few resources to English-speaking areas.

In 2016, lawyers and teachers in Anglophone regions rebelled, fed up with being sent judges and school administrators who could not speak English. Their protests drew a violent response from security forces, who killed unarmed protesters.

The protests developed into a full-blown secession battle that has put the nation on the edge of civil war. Hundreds of people have been killed, and tens of thousands have fled their homes.

The government deployed elite troops, trained by both Israel and the United States, to quash the rebellion, as scores of separatists have taken up arms and launched attacks against soldiers. Many civilians are stuck in the middle, trapped in villages overrun by separatists who demand that they adhere to strikes that shut down businesses and schools in an attempt to cripple the economy and force the government to give up.

Gruesome videos and photos purporting to show atrocities by security forces have streamed out of the English-speaking areas.

Some of the videos have been disproved; one was from a horror movie set in Nigeria. But some clearly show soldiers setting fire to villages, a tactic that has been documented by human rights groups.

The government has arrested journalists, and Maurice Kamto, one of the president’s opponents in last year’s election, who had proclaimed himself the true victor, was recently taken into custody. The charges against him, including sedition, carry the death penalty.

“Instead of armed confrontations which cause human rights abuses, Cameroon’s civic actors and foreign partners have rightly urged for political solutions,” said Paul Simo, a human rights lawyer based in Cameroon.

One ‘killed’ in Cameroon anti-government protests