Protests grow over pending deportations to Cameroon, amid abuse allegations

“We ran from our countries to be protected here. Now, when they are deporting us, our lives will be at risk.”

Indiana Taylor uses a megaphone to amplify her message as she along with other protesters gathered outside of the Prairieland Detention Center to deliver their message to “free black migrants.” The protesters gathered at the Alvarado facility with others, including staff from the legal nonprofit RAICES, or Refugee and Immigrant Center for Education and Legal Services, on October 12, 2020.(Steve Hamm / Special Contributor)

A national protest is widening over the pending deportations of dozens of Cameroon-born immigrants who lawyers and other advocates say were abused in U.S. detention centers and could face death if sent back to their homeland.

The immigrants, many of them asylum-seekers, were transferred in recent days to the civil detention center in Alvarado, about an hour southwest of Dallas. Four detained Cameroonians said in phone interviews from Prairieland Detention Center that they feared they would be tortured or killed if returned to their violence-plagued homeland.

The Southern Poverty Law Center and others have filed a civil rights complaint with the Department of Homeland Security over the alleged abuse of eight Cameroonians when they were at a Natchez, Miss.-based detention center. The Southern Poverty Law Center alleges eight Cameroonians were abused, beaten, and forced to sign their deportation papers at the Natchez detention center. All have since been moved to Prairieland, as have others from detention centers in Louisiana, Georgia, and Ohio.

Officials from U.S. Immigration and Customs Enforcement, or ICE, which handles deportations, didn’t respond to questions about the civil rights complaint and the pending deportations.

Officials at the Embassy of Cameroon in Washington, D.C., didn’t respond to phone calls and emails about the validity of travel documents to take detainees from the U.S.

Amnesty International has asked that U.S. immigration officials halt deportations to Cameroon, a West African nation of 25 million where violence and armed conflict is peaking.

Amnesty International’s Adotei Akwei, the USA deputy director of advocacy and government relations, said that “given the current conditions in the country, it is extremely likely that anyone who is returned to Cameroon will face a high risk of being detained, beaten, disappeared, tortured or possibly even killed.” 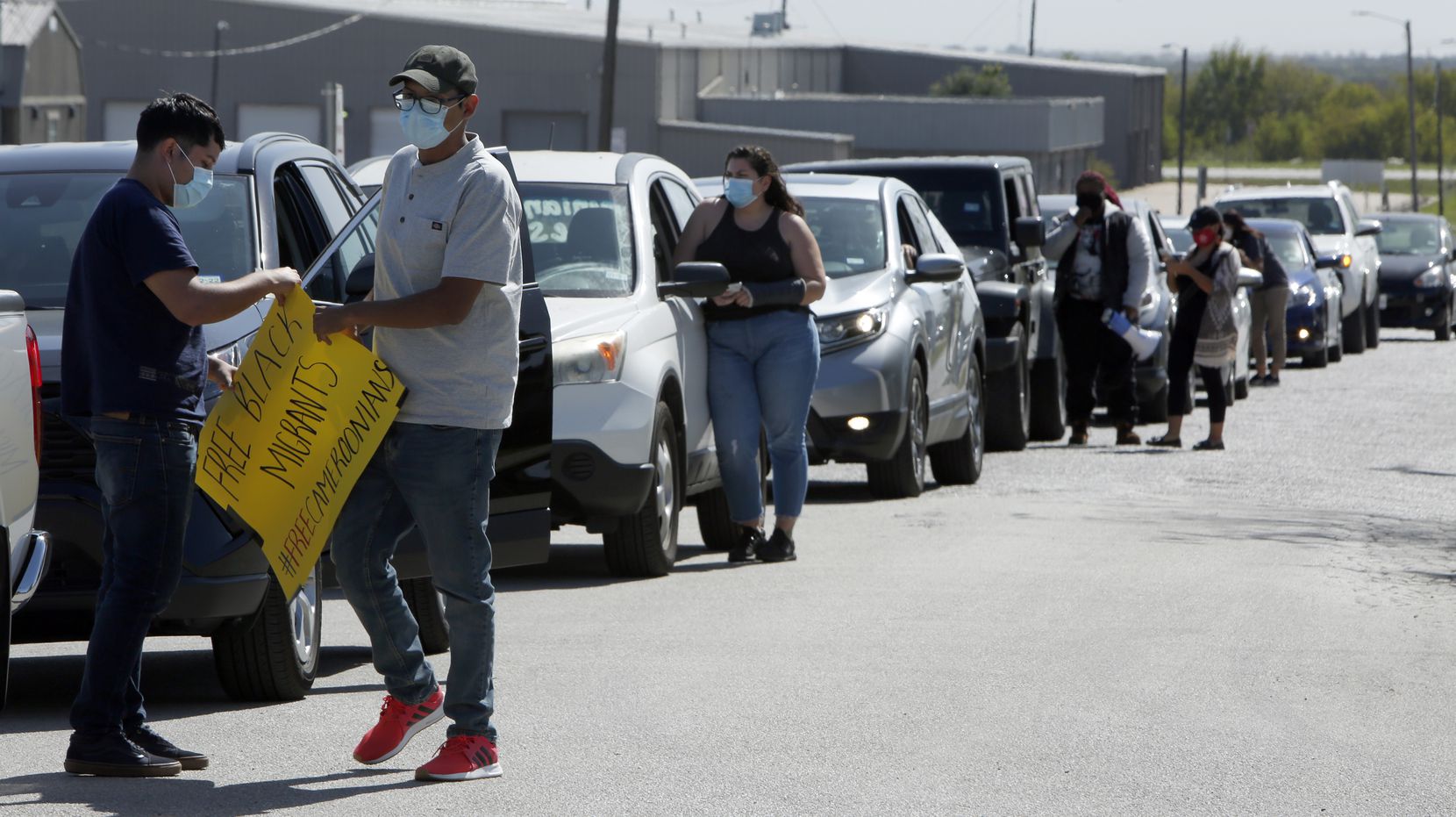 A group gathered for a socially distanced car caravan protest outside the Prairieland Detention Center in Alvarado. The group said they wanted to show support for black migrants from Cameroon detained at the facility, on Oct. 12, 2020. (Steve Hamm / Special Contributor)

Monday afternoon, demonstrators gathered outside Prairieland with “free black migrants” signs in a car caravan protest that kept people socially distanced due to the coronavirus pandemic.

In phone interviews from Prairieland, four detainees detailed their fears of deportation and their treatment at other detention centers and arduous journeys from the jungles of Panama, through Central America and into Texas border towns where they asked for asylum.

“We ran from our countries to be protected here,” said Giscard Nkenglefac, a 34-year-old Cameroonian detainee who tried for political asylum. “Now, when they are deporting us, our lives will be at risk.”

Another Cameroonian detainee in Prairieland, Josephine Kinaka, said she fears returning to Cameroon. Kinaka came into the U.S. through Laredo a little more than a year ago. She was later detained at the Irwin County Detention Center in Georgia, before being moved to Prairieland.

“It is so scary to think what is waiting for me back in Cameroon,” Kinaka said by phone.

She said she continues to suffer physically and emotionally from a beating she received back in Cameroon. 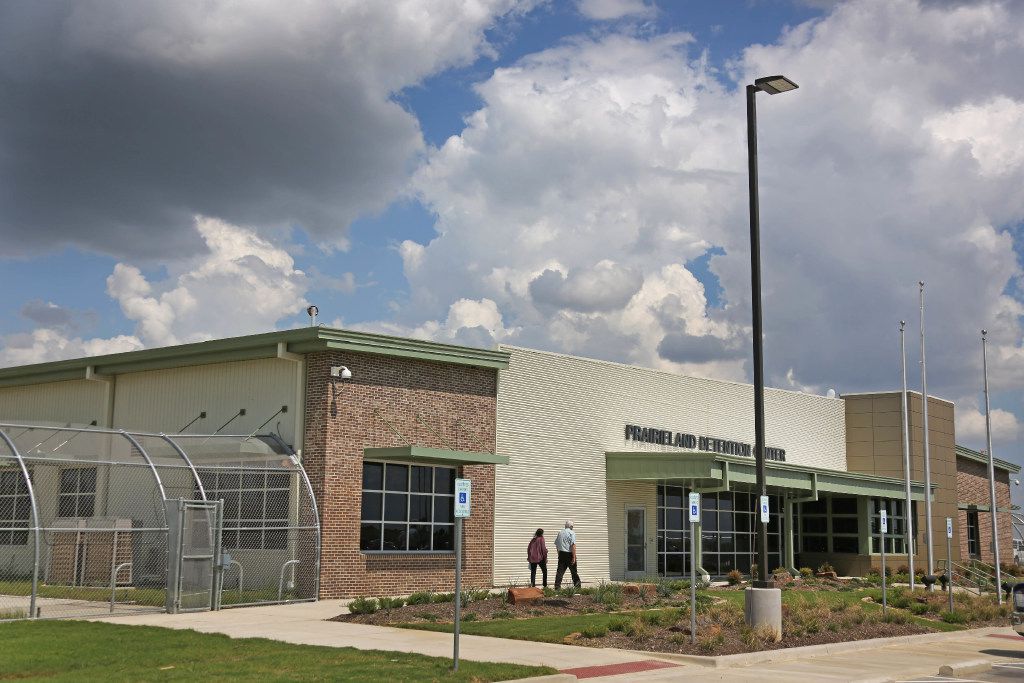 The Prairieland Detention Center opened in 2017 in Alvarado, about an hour southwest of Dallas. It has beds for about 700 detainees.

Another detainee and asylum-seeker, now at Prairieland, said he was infected with the coronavirus at another detention center and recovered.

“The stress is too much,” said Clouvis Chebegwen, who unsuccessfully sought asylum based on political persecution. “This is breaking me down,” he said in a phone call from Prairieland.

The complaint from the Southern Poverty Law Center, the advocacy group Freedom for Immigrants, and others calls for an investigation into the allegations of excessive use of force at the Mississippi detention center and for copies of any videos and reports on the incidents there. The complaint details abuse in what the immigrants called the “Zulu” dorm at the Adams County Correctional Center.

Rebecca Cassler, a lawyer with the Southern Poverty Law Center, said Monday that she spoke in person with about 10 Cameroonian detainees at Prairieland this past weekend.

“We have screened several scheduled to be on those flights and they would rather stay indefinitely in detention, and they are uniformly terrified for their lives,” Cassler said.

Teacher in NW, SW writes to government, asks for life insurance for teachers

Conflicts and corruption in Cameroon drain the economy