In his speech, this October 1, the President of the Ambazonia Interim Government, Samuel İkome Sako said Southern Cameroons should take charge of their destiny and lead efforts to prosperity.

“Now the important thing is that your way of life should be as the struggle requires, so that, whether or not we are able to come and see you, we will hear that you are all standing firm with one common purpose and that with only one desire, you are fighting together for the struggle of the restoration of the independence of Ambazonia,” says Ayuk Tabe.

The leader added that imprisonment has rather fostered the independence he is fighting for, as it has made people bolder and more determined.

“… our being in prison has given most of our brothers and sisters increased determination in the struggle and more confidence in the Lord so that they grow bolder all the time to discuss the message of the struggle fearlessly,” he said.

On his part, Samuel Sako, Interim Government leader said October 1 “marks a turning point in our nation’s history as we take charge of our destiny and lead the efforts to prosperity.

“This day of every year is not just another ordinary day in the life of our nation. This is October 1 our rightful Independence Day, a day which by all standards of legality, marks the end of colonial rule and the establishment of a free and independent Southern Cameroon.”

Although the Cameroon government says secession is “impossible” in the country, Sako has said he is hopeful the course will be attained.

“Credit me, if you may, to say that I stand this moment on the shores of our proclaimed Independence, to fill our hopes with the certainty and reality that the time comes when we will celebrate this day in honour, dignity, and even in years of pride,” he says in his speech on ABC television.

October 1 this year has been exceptionally more peaceful in major Anglophone cities and towns, with streets deserted, amid fears of confrontations between soldiers and separatist fighters.

As schools are speculated to resume throughout the country this October 5, some of the separatist activists, have joined the calls for schools to resume, but this may be difficult as Ambazonia Defence Force Commander, Ayaba Cho, says no schools. This challenge against school resumption is echoed by Sisiku Ayuk Tabe who in a Twitter post, insisted that the conditions are not yet favourable for school resumption. 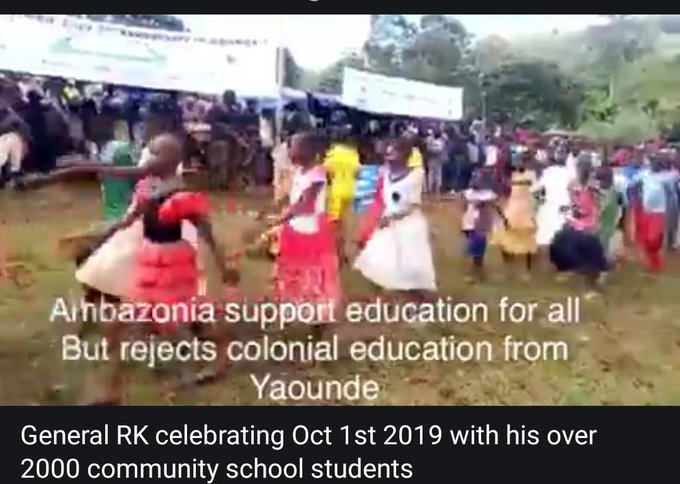 Some Cameroonian historians hold that Southern Cameroons has never been independent, as British West Cameroon was (on October 1, 1961) only asked to join French East Cameroon or the Federal Republic of Nigeria.

The separatist’s leaders have, however, resisted all calls against secession with Sissiku Ayuk Tabe declaring today: “In 2017, we declared it’s restoration. It is rooted in history, geography, and diplomacy. Self-determination is a right. We will not cede any square inch of our homeland. Independence restored or resistance forever.”