“Let me also seize this opportunity to talk to all the parents, because I cannot understand that during the day Amba boys are attacking innocent children and the surrounding population are there without doing anything, all of them should be arrested, who do not support the affected children.” Ntou’ou Ndong Chamberlin, SDO Meme Division, told reporters. 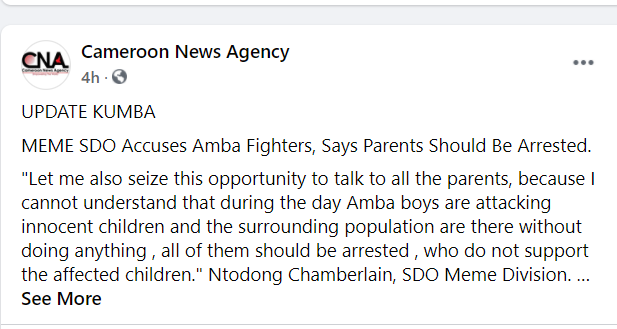 The Ambazonia Defense Council has also said their investigations have been launched but that as they go further to examine what happened, they have already been reliably informed that Government forces carried out the attack.

The Communication Secretary at the Ambazonia Interim Government, Chris Anu in a live broadcast said that previous events like February 14, 2020, Ngrabuh massacre by government forces are indication that they are responsible 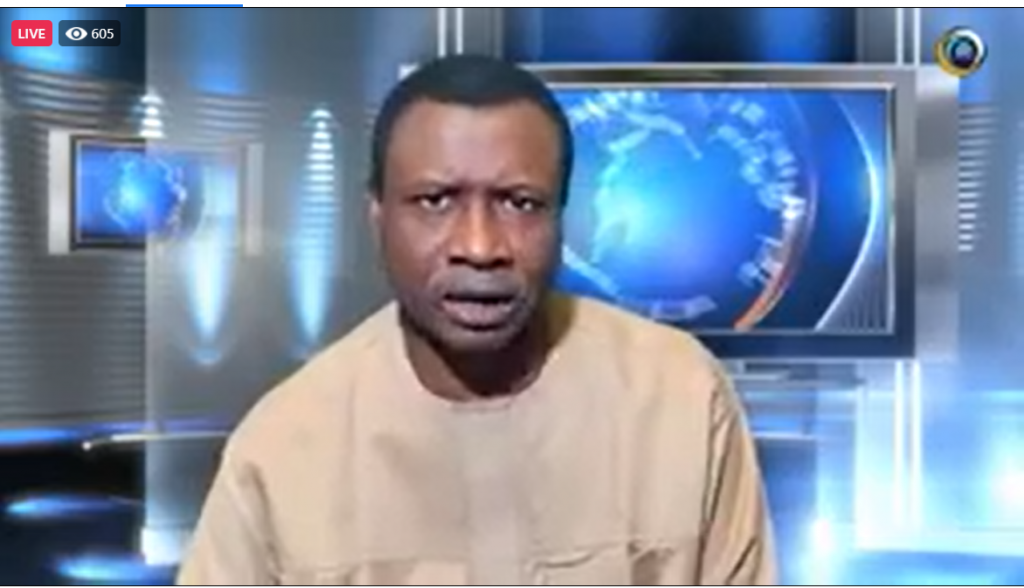 The Divisional Officer for Kumba 1, Ali Anougu, on his part urged the people of Kumba to carry out their weapons and stand firm against the Separatists.

Please everybody must come out today. Please, everybody, come out and defend your children. What kind of independence do they want. Please I am telling you, my brothers and sisters…I am crying for the first time in my life…allow children to go to school” He told a whirling crowd.

“I am shocked and outraged by the killing of innocent school children who were attending school to get an education. On behalf of the United Nations and the wider humanitarian community in Cameroon, I extend our deepest condolences to the families of the children killed and our support to the wounded and their families and to all the community”, said Mr Naab.

On 24 October, a group of armed men attacked Mother Francisca International Bilingual Academy in Kumba. At least eight children were killed as a result of gunshots and attacks with machetes. Another twelve were wounded and taken to local hospitals.

The World Health Organization has provided medical supplies to the district hospital and Médecins sans Frontières is supporting the hospital with medical supplies and personnel. The United Nations will continue to support efforts by the Government and non-Governmental organizations to provide necessary medical assistance to the wounded.

The attack against school children is the worst atrocity since the resumption of the school year on 5 October 2020 in which more students enrolled in the North-West and South-West regions than in recent years. 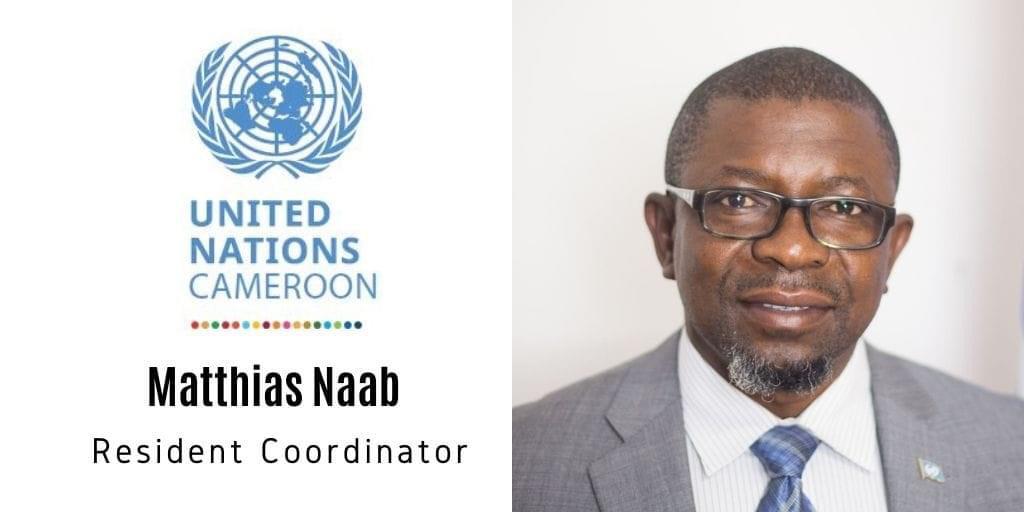 “Children have a right to education. Violence against schools and innocent school children is not acceptable under any circumstances and can constitute a crime against humanity if proven in a court of law. I call on the competent authorities to conduct a thorough investigation into this tragedy”, reiterated Mr. Naab.

Mr Naab reiterated the United Nations’ call for all armed actors to refrain from any attacks against children and other civilians, and ensure that schools, medical facilities, and their personnel are not subjected to violence or threats in any way.

The Founder of the Centre for Human Rights and Democracy in Africa, CHRDA, Barrister Agbor Felix Nkongho, has condemned the Mother Francisca school shooting in Kumba, calling on thorough investigations that will lead to arrest and trial of perpetrators,

“I strongly condemn the killing of school children at Mother Francisca International Bilingual Academy in Kumba. These gruesome and barbaric killings are gross violations of the right to life of these kids. It is unacceptable for anyone or groups of persons to harass, attack, and or kill children. It is a fundamental right for children to be educated. Hence, the perpetrators of these heinous crimes should be held accountable. My sincere and heartfelt condolences to their families.” Barrister Nkongho said.

A message from the Palace regrets the act of what they described as “utter barbarism that took place in Fiango, Kumba this dark morning.”

Nfon Mukete IV Ekoko on behalf of the Bafaw people personally condemns this senseless act of violence in the strongest possible terms. Our deepest condolences go to the bereaved families. Only the Almighty GOD in HIS infinite mercy can give the affected families the fortitude to go through these challenging times. Our bleeding hearts are with them.

Over the years, Kumba has suffered its share of bad days, but today’s cold-blooded murder of innocent children, studying in a classroom, surpasses our wildest imagination of what a very bad day could be. It is a tragedy like no other the City of Kumba has witnessed in its long proud history.

We say a big “NO” to the perpetration of any evil acts on the soil of Kumba, no matter the reason. Evil is evil and can never be condoned in a civilized society. As a peace-loving people, there can be no justification whatsoever for this satanic act! 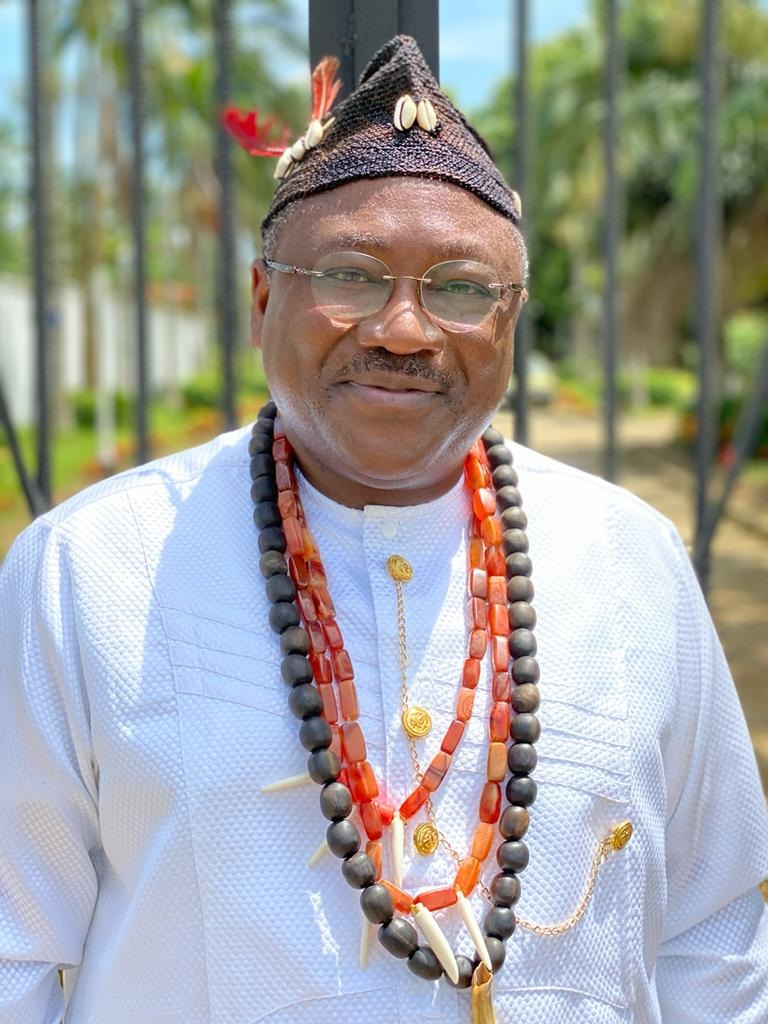 To the perpetrators of this heinous crime, they should remember that human life is sacred and there is Divine retribution. Their acts will therefore not go unpunished.
The Almighty GOD is still on HIS throne!

No matter what, the future of Kumba rests on us all achieving real peace for all its inhabitants. Every life counts in our GOD ordained peace project. We will not relent in our peace drive and our Prayer for true peace remains as fervent as ever! There is no turning back!

May the sweet & gentle souls of all the children so untimely departed on this sad day of mourning, rest in Perfect Peace.

Cameroon Army on Alert Ahead of Tuesday’s Protests