“I was not in court so I consider the verdict a non-event. I maintain that the Cameroon justice system is completely rotten. You don’t keep me in prison and call others in court and give my sentence to them to come and give me”.

These are the words of Mancho Bibixy, Anglophone activist and leader of the coffin revolution, detained at the Kondengui prison in Yaounde, the capital city of Cameroon.

Jailed Anglophone activists Mancho Bibixy Tse aka BBC and Ngalim Felix, who has been at the Kondengui prison for nearly four years have each received 18-month jail sentences.

The verdict was handed by a Yaounde court that tried them for an uprising in the detention facility last year.

Reliable sources however hold that the judgment was passed in the absence of the Anglophone detainees.

“He (Mancho) was not even aware of a trial yesterday. Just a few were surprisingly selected and taken to court and a general judgment passed,” a source close to Mancho told Mimi Mefo Info.

Our source adds that; “… Mancho’s mates from court told him he was given 18 months imprisonment for group rebellion alongside Felix”.

The Anglophone activists it should be recalled were again taken to court over prison mutiny in 2019. The protests which began peacefully, turned violent after suspected hardened criminals destroyed offices and set part of the Kondengui detention facility on fire. 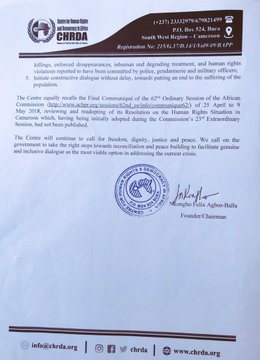 Mancho and co were also handed 15-year sentences with heavy fines in 2018. They were accused of rebellion, spreading false information, hostility against the state, treason, and taking part in protests in the Anglophone regions of the country.

The activists are among hundreds of other Anglophones detained in prisons across the country over the Anglophone Crisis which escalated in 2016.

Schools at the heart of Cameroon's separatist conflict

September 22, 2017: A day which changed the course of the Anglophone crisis in Cameroon