By Tata Mbunwe
The Government of Cameroon has said it is supporting traditional rulers vying for this Sunday’s Regional Elections with financial assistance – compared to that which is often granted political parties for campaigns.

Territorial Administration Minister, Paul Atanga Nji, communicated President Biya’s decision in which he charged Regional governors in the Northwest and Southwest regions with the responsibility of handing over the financial package not later than Thursday, December 3.

The traditional rulers had earlier asked the Government for support to help them prepare for the elections, according to MINAT’s communique.

According to Minister Atanga Nji, the “gesture reflects the constant solicitude of the Head of State for the traditional leaders of Cameroon. At the start of the current electoral campaign, candidates from the traditional leadership expressed the wish to benefit from financial support in the same way as the funding granted to political parties during electoral consultations.” 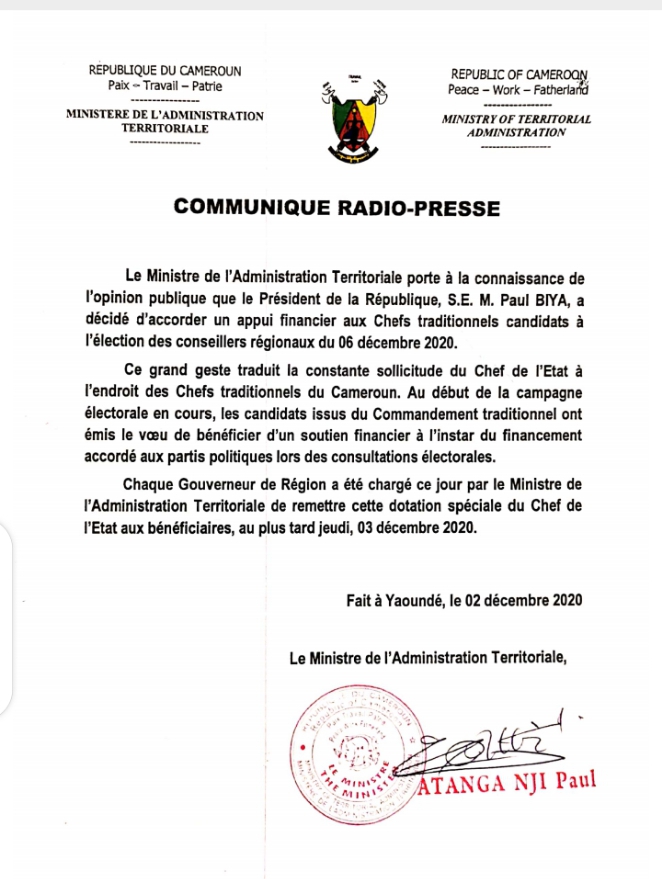 It is unclear how much the traditional rulers will receive as financial support as the amount has not been stated in the recent Government communique.

Only traditional rulers standing for the elections will benefit from the financial package, according to the release signed by Minister Atanga Nji.

The first-ever Regional Elections is an offshoot of a Major National Dialogue convened last year to discuss the crisis rocking the two English-speaking regions of the country.

Although the dialogue has failed to resolve the conflict one year later, the government believes in a Special Status (including the setting up of Regional Assemblies) granted the two regions as a means of ending the conflict that started in 2016.

The December Regional Elections will be held in the entire country and Regional Assemblies will be formed for the first time in the country’s history.

The English-speaking Northwest and Southwest regions are expected to be compensated with a House of Chiefs, which Government says will help to protect the cultures and traditional heritage of the Anglophone population who say they are marginalised by the French-majority Government.

The county’s two major political parties, the Social Democratic Front and the Cameroon Renaissance Movement, CRM, are boycotting the polls on grounds that the Electoral Code be revised and the crisis in the Anglophone regions be resolved.

Pope Francis condemns massacre of over 100 farmers in northeastern Nigeria

How Gendarmes are framing up, extorting money from civilians in Bamenda