One of the first people who created a group to fight the government and now a repented person, working for the interests of Cameroon,  has made a startling revelation that some Government officials and  Elites carried out the Kumba attack that saw 7 students killed, to put the blame on Ambazonians. The Cameroonians born based in Nigeria, Dr. Success Nkongho who after repenting as a rebel leader in the ongoing armed conflict in Anglophone Cameroon, worked with the government to convince Separatist fighters to drop their weapons, has revealed that not all crimes are done by Ambazonians “The carnage in Kumba was done by this category of people I have just mentioned, the disgrace of girl sin Limbe was done by those I have just mentioned. They contract the boys to go and kill the children so that they will go to Yaoundé and meet Paul Biya and ask him to give money. The day this crisis will end, that will be the end of the mansion they are building somewhere. They do not want this crisis to end. Let me tell you today, if they wanted this crisis to end, I will stop it within two months. Anytime peace wants to return, they just pay a few boys to go and commit a crime and when the boys do that, we start shouting Ambazonia.” 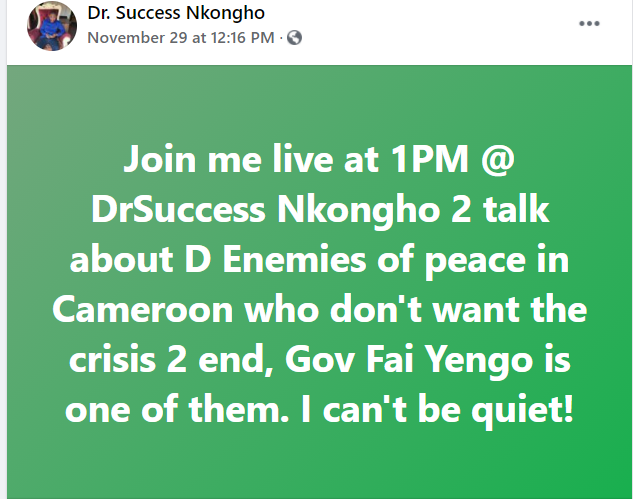 He made the revelation on Monday, November 30, 2020, in a Live Facebook show, saying that:

“Apart from Ambazonians that exist, we also have Yaoundezonians who are equally committing crimes. We also have Cambazonians who are also committing crimes. We also have Kamtozonians and Anglozonians. All of them are hiding under the umbrella of AMbazonians to commit various crimes because we have all joined our hands to stigmatize Ambazonians.” I am not in this broadcast to justify Ambazonians. It is not every crime that is committed in the northwest and southwest is committed by Ambazonians. I will rather die speaking the truth than to be alive compromising with lies. We have believed lies for so long. It is time for us to expose the truth.”

He also said this group of people are responsible for the brutal killing of the Mayor of Mamfe Ashu Priestly Ojong, who was murdered in May 2020. But the blame was put on Ambazonians “All crimes are not committed by Ambazonians. Let me give you an example, my brother and friend, the youngest Mayor that Cameroon has ever produced. Forget about claiming responsibility. The Mayor left his house with his friend who is his driver and the current Mayor of Mamfe now, heading to his village. They were attacked by unknown gunmen and the gunmen shot at the car there was no bullet on the car, no scratch on the body of the driver…no scratch on the soldiers and you tell me that he was killed by Ambazonians? Anglophone Elites together with Francophone Elites do not want the crisis to end. When they drop weapons, they will no longer make money because the crisis has become a business.”

This revelation coming from an in house person is enough for the release owners of the Mother Francisca International Academy attacked on October 24, 2020,  Suh Gabriel and Ayanu Judith, and four teachers who are currently awaiting trial in Buea, after being charged with terrorism and capital murder.

Cameroon and Nigeria – All that Glitters is not Gold

Mbam and Inoubou SDO wages war against homosexuality in schools