President Paul Biya has asked for concrete resolutions and recommendations from football protagonists in Cameroon on how to solve infighting within the football family in the country.

The end of the longstanding crisis will permit the kick-off of the local football championship in the country.

Going by the correspondence, actors in the domain of football should hold an emergency meeting today Thursday, November 18th to discuss what is causing confusion in the organisation of the local football championship.

The president has frowned at the tussle between structures in charge of the management of football.
He said the tussle is presenting a bad image of Cameroon home and abroad. 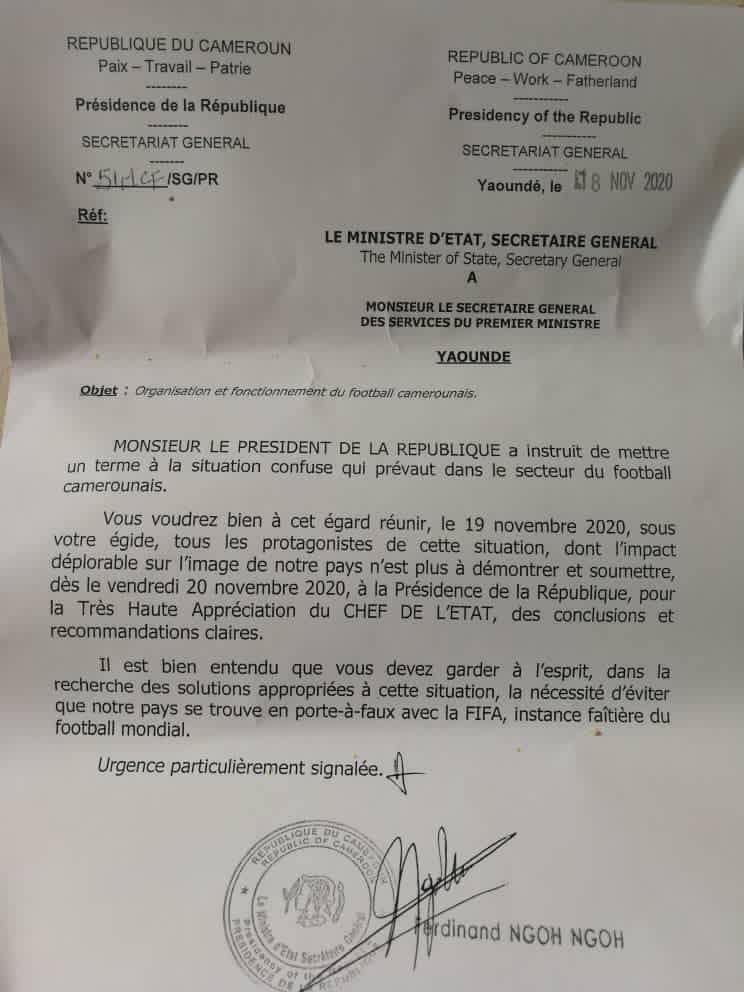 He has called on those concerned to work together as a team to redeem the image of local football.

Ferdinand Ngoh Ngoh who signed the document has indicated that a peaceful resolution of the tension will avoid any misunderstanding between the football association in Cameroon and the world football governing body FIFA.

it should be noted that there has been a tussle between Cameroon Football Federation FECAFOOT and Cameroon Professional Football League (LFPC) on which body reserves a legitimate right to organise local football championship in Cameroon.

While FIFA seems to be supporting FECAFOOT, the Court of Arbitration for Sports (CAS) in a recent verdict accorded LFPC headed by General Pierre Semengue the right to organise a local football championship.

The intervention of the presidency to solve the problem football pundits say is to save the career of young footballers in Cameroon that are watching their passion and talent being toiled by football officials struggling to maintain their fame and ego.

The United States must sanction the Republic of Cameroon – A Zimbabwe Replica.