Every start of each school year since 2017, is lit up with debates on whether the armed conflict could continue while schools continue to be active in the Anglophone regions. Four years down the line, some Ambazonian Activists believe that the war has gone past the level of school boycott. They have added their voices for schools to be effective this Monday, October 5, 2020. However, three leaders of the conflict, Dr. Cho Ayaba of the Ambazonia Governing Council and Dr. Samuel Ikome Sako of the Interim Government, and Sisiku Ayuktabe Ambazonian leader IG Care arrested and jailed in Yaounde have maintained that there will be no school resumption before an end to the war.

The three have proposed alternative means; one is for community-controlled schools while two are for a complete ceasefire and or end of the conflict before education.

Cho Ayaba opines that, during an armed conflict situation, opinions like those calling for school resumption is premature “Most of you want to turn a war for the liberation of a people into an exercise of opinions. Opinions do not liberate. Chaos does not liberate. Policy and strategy do. Who gets up in September an overturns a four years policy, introduce a new one to take effect in weeks? Who injects such a distraction 24hrs to our day of independence? Do you then doubt when people refer to our liberation struggle as a comedy? While one arm of the confused group is calling and campaigning for a ceasefire totally ignoring the genocide, the other arm is campaigning for a return to school totally ignoring the absence of peace and justice.” 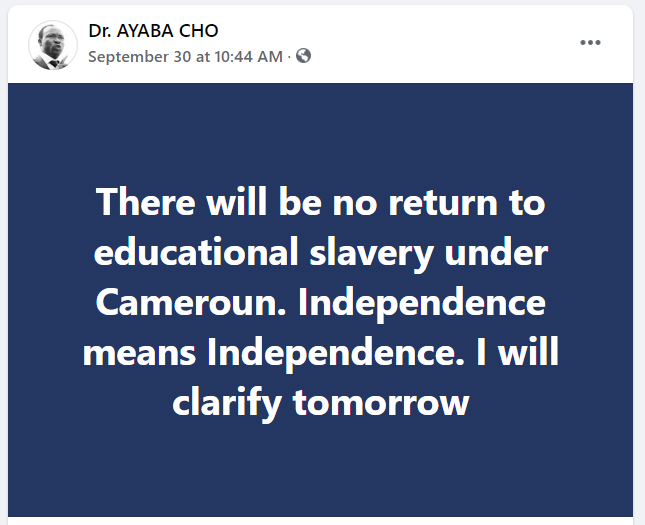 He encouraged the creation of community schools, vowing that there will no government-controlled school under the current government educational system, adding that children above 18 years should be thinking about joining the combatants.

“We did not simply reject its enslaving curriculum of education; we have created ours and modeled it on a study of more than 10 of the best educational systems in the world. We did not only reject its GCE Board. We have established the Ambazonia Education Board that currently oversees Community schools. We are currently working on a scheme to integrate private schools within our strategy to ensure that children below the age of 18 can gradually begin to be educated. For the moment children above the age of 18 will remain committed to the defense of our homeland. Thousands of fighters were students. We are working on a stabilization scheme in defense that will allow our soldiers to take education in the morning.”

On his part, the President of the Interim Government, Samuel Ikome Sako said school resumption must be after a negotiated ceasefire supervised by the United Nations.

“The Interim Government is AGAINST School Reopening in Ambazonia without a Negotiated Ceasefire, or Safe School Zones supervised by the UN. The security and safety of ALL our kids take precedence over French Cameroon (mis)education. @UNHumanRights“ 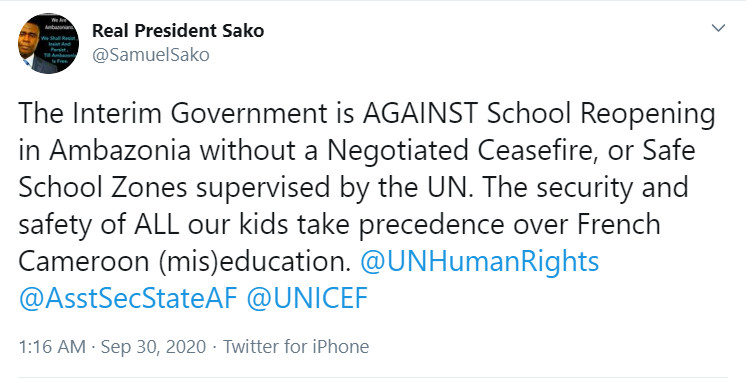 Ambazonian leader considered as the Face of the Revolution, Sisiku Julius Ayuktabe, has corroborated the statement made by Samuel Ikome Sako on the need for a complete end of the war before education. 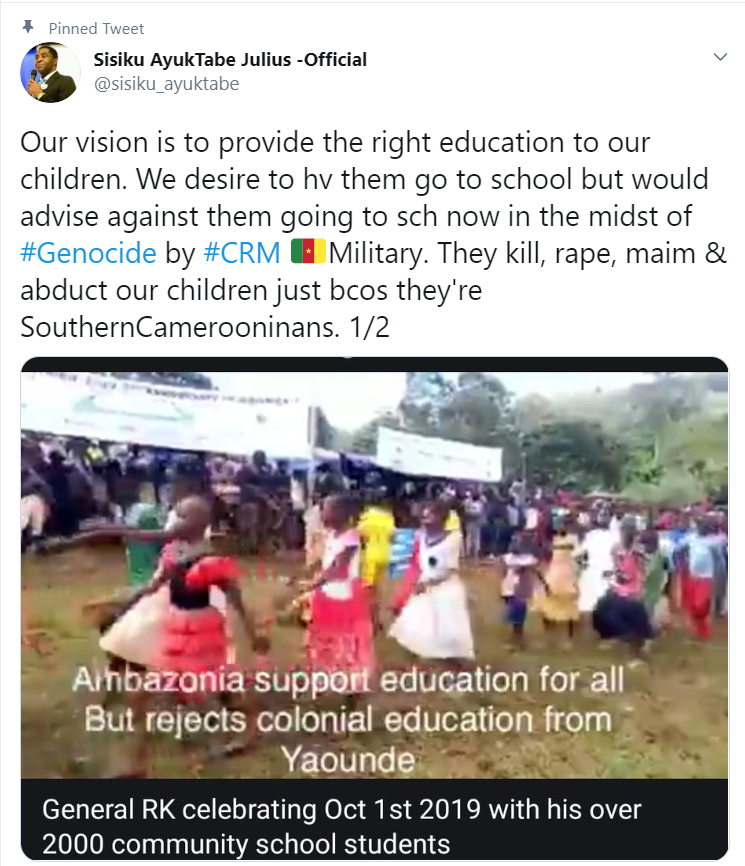 “Our vision is to provide the right education to our children. We desire to have them go to school but would advise against them going to school now in the midst of #Genocide by #CRM Military. They kill, rape, maim & abduct our children just bcos they’re SouthernCamerooninans. Ambazonians cherish educating their children. However, the Right to #Life precedes the Right to #Education. When peace returns, our children will go to school & each of them will have a world-class education, which will offset the sacrifices they are making now. #No2Genocide.”

But thousands of others are now Internally Displaced Persons, IDPs and the fight now is for survival. However, some of these IDPs have found save havens in their host communities with good opportunities to continue their education.

In the northwest and southwest regions, some schools are given facelifts by the communities, while others are still in abandoned shapes. In Urban areas where the conflict has not been worst hit, schools have been going on with students taking on end-of-year examinations hitch-free.