The US Embassy In Yaoundé, Cameroon has described as ‘Fake News’, circulating on social media, alleging that the US Ambassador to the United Nations, Kelly Craft, has said the United States will send military to intervene in Cameroons northwest and southwest regions. Audio, seems to be a newscast but the media organ is not mentioned with a man speaking French, is being circulated. In the audio, it is alleged that the US will intervene to end violence in the Anglophone region in favour of Ambazonians seeking to create a State.

“Contrary to claims in recent fake news stories, neither the U.S. Senate nor the full U.S. Congress has held a debate on or taken any action to approve, any U.S. intervention in Cameroon. While members of the U.S. Senate introduced a non-binding resolution on September 7 expressing concern about human rights violations in Cameroon and calling for an end to violence, the resolution did not call for intervention. Therefore, there is no decision awaiting the President’s approval” 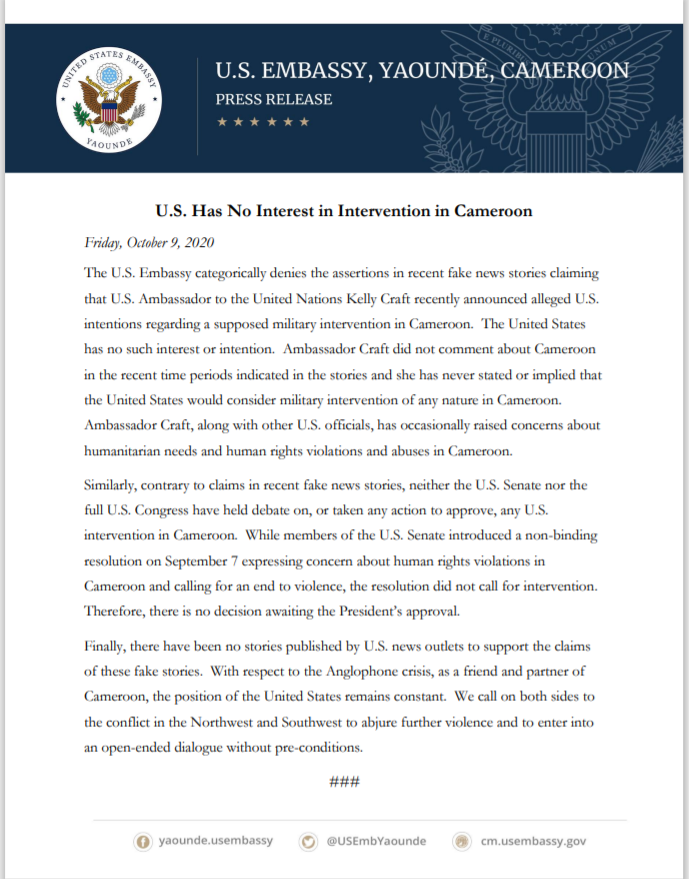 The Embassy reiterated the stance of the United States in the ongoing armed conflict, calling for negotiations without pre-conditions by both sides, “With respect to the Anglophone crisis, as a friend and partner of
Cameroon, the position of the United States remains constant. We call on both sides to the conflict in the Northwest and Southwest to abjure further violence and to enter into an open-ended dialogue without pre-conditions.”

Amnesty USA Tells Gov’t Not To Repatriate People To Cameroon