The Nera 10 leader and President of IG Care, Sisiku Julius Ayuktabe from his cell in Kondengui principal prison, has called on leaders of other groups to join hands together and fight a “common enemy”. In his missive, he particularly called out; Dr. Cho Ayaba, Dr. Samuel Sako, Dr. Ebenezer Akwanga, Dabney Yerima, John Mbah Akuroh, Ntumfoyn Boh Herbert, advising them to collaborate because they need it and not because they want it. In 2019, Sisiku Julius Ayuktabe dismissed Ikome Sako as Interim leader of the Interim Government, in return, the Interim Government that was led by Dr. Sako impeached Sisiku Ayuktabe based on allegations of a compromise. This has led to the creation of two Interim Governments. 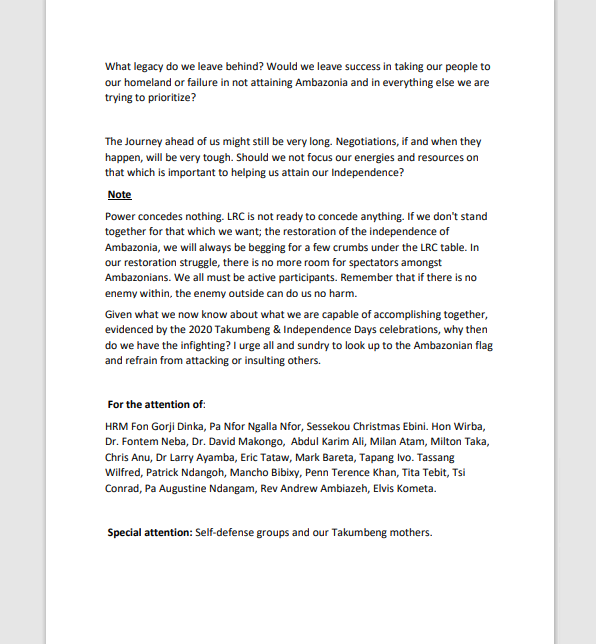 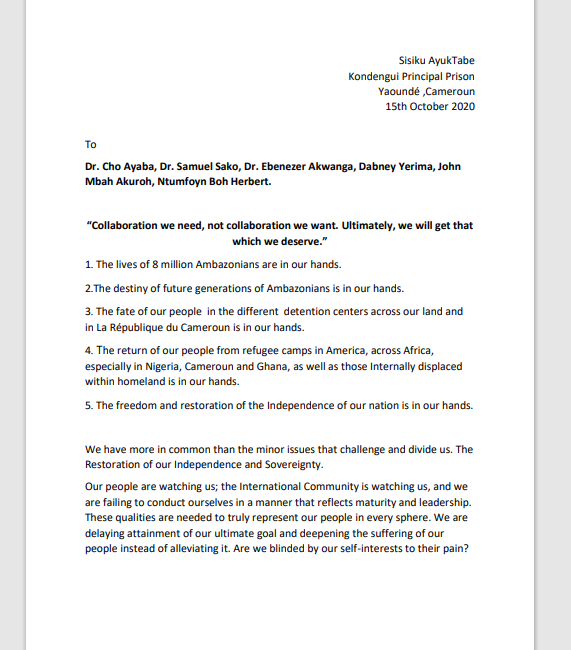 The armed conflict in the Anglophone regions entered the 4th year this October 2020. It was in October 2016 when Lawyers protested the gradual elimination of the common law system.

They were arrested, molested and some locked up. Many fled to other countries for fear of being tortured. This protest would later push teachers to launch theirs on November 21, 2016. Since then the government has claimed they met most of the demands of the striking lawyers and teachers but the arrest of leaders on January 17, 2017, led to the armed conflict as Anglophone started fighting for what they now called Ambazonia, a separatist state.

Restoration of our Independence and Sovereignty.

Our people are watching us; the International Community is watching us, and we are failing to conduct ourselves in a manner that reflects maturity and leadership. These qualities are needed to truly represent our people in every sphere. We are delaying the attainment of our ultimate goal and deepening the suffering of our people instead of alleviating it. Are we blinded by our self-interests to their pain?
What legacy do we leave behind? Would we leave success in taking our people to our homeland or failure in not attaining Ambazonia and in everything else we are trying to prioritize?
The Journey ahead of us might still be very long. Negotiations, if and when they happen, will be very tough. Should we not focus our energies and resources on that which is important to helping us attain our Independence?

Power concedes nothing. LRC is not ready to concede anything. If we don’t stand together for that which we want; the restoration of the independence of Ambazonia, we will always be begging for a few crumbs under the LRC table. In our restoration struggle, there is no more room for spectators amongst Ambazonians. We all must be active participants. Remember that if there is no enemy within, the enemy outside can do us no harm.
Given what we now know about what we are capable of accomplishing together, evidenced by the 2020 Takumbeng & Independence Day celebrations, why then do we have the infighting? I urge all and sundry to look up to the Ambazonian flag and refrain from attacking or insulting others.

Lebialem on October 1st: Ambazonian fighters ruling from the ruins