Despite Government, Cultural Association Condemnation, Ambazonia Restoration Forces are still keeping the Fon of the Nso clan, HRH Sehm Mbinglo II since Thursday, November 5, 2020. A source from the Bui Warriors inner circle told CNA that they plan on using the Fon for a prisoner swap and other demands. The demands range from the release of all Anglophone detainees including the leader Sisiku Ayuktabe to withdrawal of the military from the Anglophone regions. That is the reason why they released former Archbishop of Douala, Christian Cardinal Tumi, who was kidnapped alongside the Fon’s delegation, to pass the message to President Paul Biya, the source confidently told CNA.

The people of Bui are still anxiously awaiting the release of their Fon, HRH Sehm Mbinglo.

1) That the Cardinal should agree to send a resignation letter to the Ambazonian people resigning from his position as the president of refugees and internally displaced peoples commission created by President Paul Biya.

2) That the Cardinal will immediately return to Yaoundé and pass a direct message to Paul Biya to :

(i) Release all Ambazonia prisoners of war starting with Sessiko Ayuk Tabe.

(ii) Government should get to the negotiating table to end the war.

(iii) That Government should stop all activities in Ambazonia starting with withdrawing all their Military forces. Despite protests from Takembeng and other villagers, the Fon is still being held since Thursday.

Leaders of the Nso Community in South Africa , USA and Europe have condemned the kidnap of the Fon, calling on the abductors to release him without conditions.

They decried the rampant cases of abductions and attacks on civilians, calling on both sides of Cameroon’s conflict to engage in dialogue. 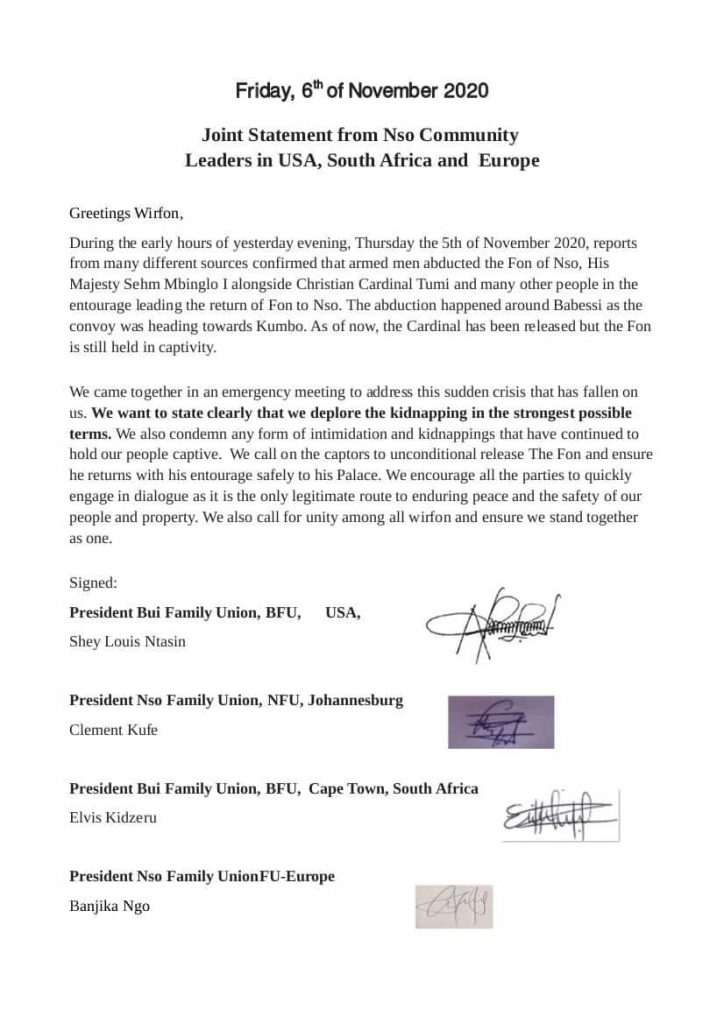 The Minister of Communication, Rene Emmanuel Sadi said on Friday November 6, 2020 that the attack and abduction on the clergy Christian Cardinal Tumi and the Fon of Nso, Sehm Mbinglo was unacceptable.

He revealed that President Paul Biya has dispatched a rescue mission. 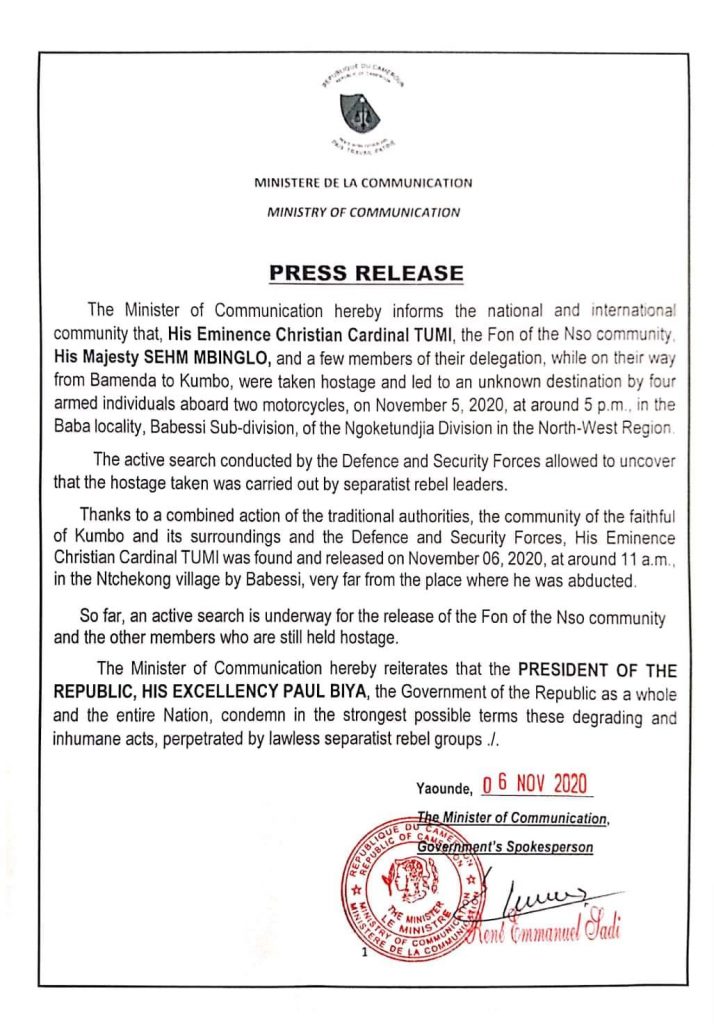 On Thursday morning, the Fon and Cardinal were going to Kumbo from Foumban in the West region. But their delegation was intercepted around Baba in Ngoketundjia division, northwest region by Ambazonia Fighters.

This was almost a year since the Fon lastly saw Bui division after several kidnapping and deaths in his compound, which pushed him to abscond his throne to Yaoundé for safety.

How Cameroons Regional Polls Went Down In Restive Anglophone Regions

Court charges Stand Up For Cameroon members with insurrection, transfers them to prison